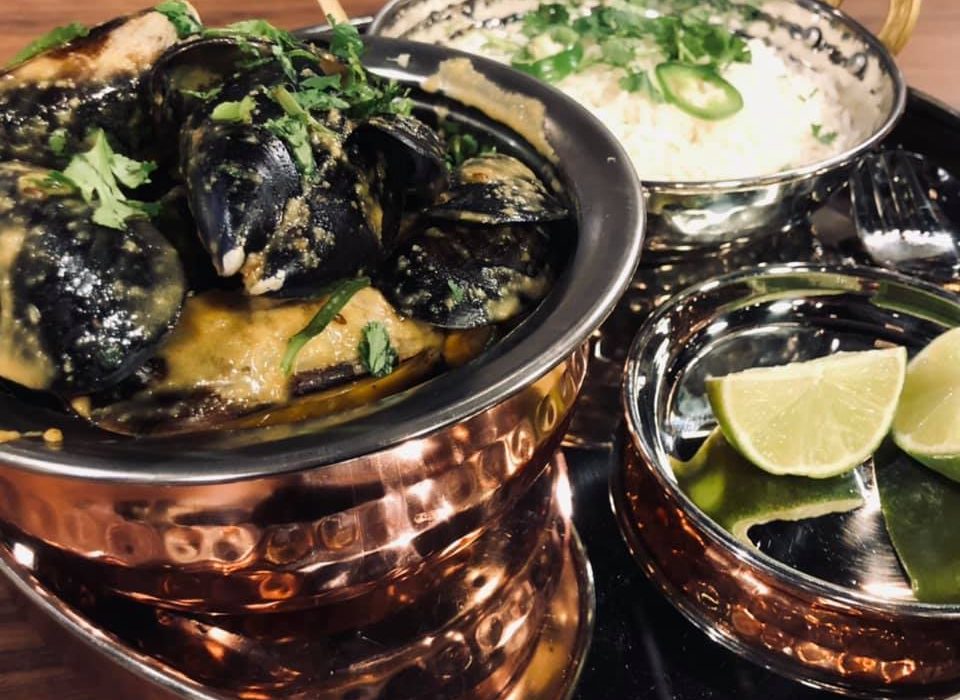 These juicy Spicy Coconut Mussels are quickly cooked in coconut milk and flavourful Indian spices. Dinner doesn’t get any easier than this delicious recipe

Method:
1. Heat the vegetable oil in a medium non-stick pan and fry the onion until golden brown.

2. Add the chillies, ginger and garlic pastes, salt, turmeric, garam masala and tomatoes and cook until the tomatoes have softened and start to break down.

3. Meanwhile, cook the mussels in a large pot of boiling water for about three minutes, until they have opened. Remove them with a slotted spoon and set aside. Reserve the water.

4. Add the coconut cream, coriander and a splash of the cooking water to the spices and tomatoes and stir. The spice mixture should be thick enough to coat the mussels and enter the shells.

5. Remove some of the mussels from their shells and leave others in their shells, for a dramatic and appetising effect. Add the mussels to the spice mixture and stir thoroughly.

6. Serve in a bowl with Rice lots of the broth and good bread on the side.

Mindi Keane cooked this recipe on Ireland AM.

This website uses cookies to improve your experience while you navigate through the website. Out of these cookies, the cookies that are categorized as necessary are stored on your browser as they are essential for the working of basic functionalities of the website. We also use third-party cookies that help us analyze and understand how you use this website. These cookies will be stored in your browser only with your consent. You also have the option to opt-out of these cookies. But opting out of some of these cookies may have an effect on your browsing experience.
Necessary Always Enabled
Necessary cookies are absolutely essential for the website to function properly. This category only includes cookies that ensures basic functionalities and security features of the website. These cookies do not store any personal information.
Non-necessary
Any cookies that may not be particularly necessary for the website to function and is used specifically to collect user personal data via analytics, ads, other embedded contents are termed as non-necessary cookies. It is mandatory to procure user consent prior to running these cookies on your website.
SAVE & ACCEPT